Pregnant women who take common epilepsy drugs up to four times as likely to have child with autism or learning disabilities, study warns

Women who take epilepsy drugs during pregnancy may be significantly more likely to have a child with autism or learning difficulties, research suggests.

A study of of 4.5million children found rates of the conditions were twice as high in youngsters whose mothers were on topiramate or valproate.The overall incidence of autism and learning disabilities in children born to women not on the drugs was 1.5 per cent and 0.8 per cent, respectively.  But among children whose mothers took topiramate during pregnancy, rates of autism rose to 4.3 per cent and learning difficulties 3.1 per cent. Mothers who took valproate were also more likely to have a child who was autistic (2.7 per cent) or had learning difficulties (2.4 per cent). It is not clear how many expectant mothers in the UK or US are on the medications, which are among the most commonly prescribed in both countries.  But around 2,500 British women with epilepsy and 25,000 American women give birth every year. The UK's medicines regulator warns women should avoid the drugs in pregnancy due to concerns about birth defects.

A study of 4.5million children in Nordic countries found that 1.5 per cent of youngsters born to mothers not taking medication were autistic, while 0.8 per cent had learning disabilities. But the rates soared among mothers taking topiramate (left), with 4.3 per cent of youngsters having autism and 3.1 per cent being diagnosed with learning difficulties by the age of eight. Mothers who took valproate (right) were also more likely to have a child who was autistic (2.7 per cent) or learning difficulties (2.4 per cent) 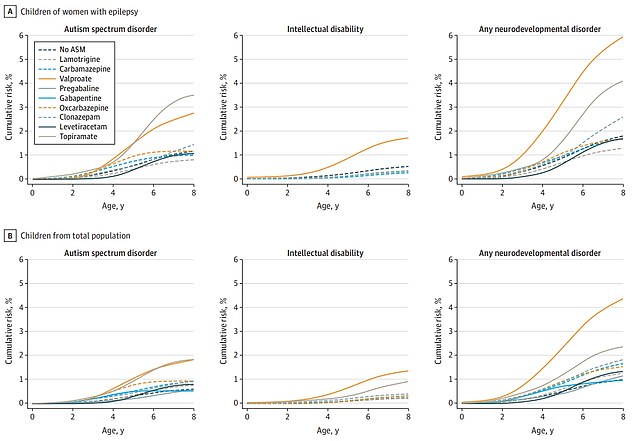 The graphs show the risk of a child developing autism (left), an intellectual disability (middle), any neurological disorder (right) based on whether their mother took epilepsy medication (top row) or did not (bottom row). The graph shows that drugs including topiramate and valproate put children at greater risk

One in 200 pregnant women require anti-seizure medication during pregnancy and the figure is on the rise.Those who stop taking the drugs before or during pregnancy are at risk of having uncontrolled seizures and dying. Doctors and patients are put in a difficult position as some epilepsy medications are known to trigger mental or physical defects in babies, the researchers said. Earlier studies showed valproate triggers a three to five-fold increase in the risk of autism or intellectual disability in youngsters. But the new research, led by the University of Bergen in Norway, found the risk of neurodevelopmental disorders after exposure to other epilepsy medications 'remains uncertain despite their frequent use. They looked at the medical records of all children born in Denmark, Finland, Iceland, Norway and Sweden in the two decades to 2017.

The data was then matched to their mothers', with pregnancy health records and prescriptions examined. They looked at the 10 most common epilepsy drugs, which 16,170 mothers were taking. With regulators warning pregnant women against taking valproate and topiramate, safety data on other treatments was 'urgently needed', they said. Children were considered exposed to epilepsy medication if their mothers had at least one prescription between her last period before becoming pregnant and when she gave birth.The findings, published in the journal JAMA Neurology, show pregnant topiramate-users were 2.8-times more likely to have an autistic child and 3.5-times more likely to have a child with learning difficulties.Meanwhile, it was 2.4-times more common for expectant mothers taking valproate to have an autistic child and 2.5-times more likely for them to have a child with a learning disability. Epileptic seizures are caused electrical signals in the brain becoming scrambled and sudden bursts of electrical activity.

Both topiramate and valproate, which cost around 6p per tablet and are also prescribed for migraines, work by reducing these excessive bursts and restoring the normal balance of nerve activity. The NHS warns that the prescription-only drugs, which are taken once or twice a day as tablets or capsules, can cause problems in pregnancy.

A baby's brain is developing until the end of pregnancy, so medicines that target a mother's brain can affect how her child's develops. Topiramate is linked to a higher risk of problems in babies if it is taken during pregnancy, so expectant mothers are only advised to take it if the benefits outweigh the risk, the health service says. Valproate can trigger birth defects and long-term learning difficulties, so it is not recommended to women looking to become pregnant. The latest study also found that the bigger the dose of either drug, the bigger the risk of neurological issues in children

Mothers who took less than 100mg per day of topiramate were 1.7-times more likely to have a child with any neurodevelopmental condition. The risk jumped to 2.9-times higher if they were taking more than 100mg per day. The NHS recommends that epilepsy sufferers take 100mg to 400mg daily. For valproate, babies of mothers taking less than 750mg were 2.3-times more likely to have a neurological problem, with the figure rising to 5.6-times higher if their dose was above 750mg per day. A 600mg to 2,500mg daily dose is usually prescribed for Britons with epilepsy. But the researchers spotted no higher risk of neurodevelopmental disorders among babies exposed to eight of the other most popular anti-epilepsy drugs, when taken on their own. These are: lamotrigine, levetiracetam, carbamazepin, oxcarbazepine, gapapentin, pregabalin, clonazepam and phenobarbital.  The study comes after the NHS came under fire after it emerged that doctors were not informing pregnant women of the potential risks of valproate to their baby. An investigation found the drug is still being given out by the NHS, in blank packaging without instructions or warning labels.  The latest figures, published in March, show the drug was given to 247 pregnant women between April 2018 and September 2021. Around six foetuses are exposed to the drug every month.  Campaigners fear the drug could pose the same deadly risk as thalidomide, the medicine prescribed for morning sickness in pregnant women that killed 100,000 babies and left 10,000 severely disabled by the time it was withdrawn in 1961.  NHS England is working to reduce sodium valproate's use by women who can get pregnant by 50 per cent next year.

The NHS is facing a thalidomide-style scandal over doctors prescribing an epilepsy drug to pregnant women that is known to cause birth defects, it was claimed last night.

Sodium valproate was hailed as a breakthrough drug for epileptics as it helped control fits and seizures, but reports began to surface in the 1980s of babies with abnormalities being born to mothers who took the medicine during pregnancy.

Two years ago, a report criticised the failure of doctors to inform women about the dangers of the drug and said they were still not telling women the full story when prescribing.

According to The Sunday Times, the controversial drug is still being given out by the NHS, in blank packaging without instructions or warning labels.

The latest figures, published in March, show the drug was given to 247 pregnant women between April 2018 and September 2021. Around six foetuses are exposed to the drug every month.

Campaigners fear the drug could pose the same deadly risk as thalidomide, the medicine prescribed for morning sickness in pregnant women that killed 100,000 babies and left 10,000 severely disabled by the time it was withdrawn in 1961.